I had been planning this trip for months—shocking myself with a degree of organisation I rarely exhibit.  Near the end it nearly all came unstuck—now I am on the train to Zagreb.  Here is what happened:

But before I sign off feeling obnoxiously smug and self-satisfied, a few reflections:

Today was my first meeting with someone from the Balkans—or not really, as it turned out.  I met Marta Cerovecki.  She is not a social entrepreneur, but certainly could be a very successful one.  Put simply, she is the daughter of the ex-boyfriend of the neighbour (living in Oxford) of a student I met while teaching a class at Oxford on social enterprise—got it?  Or let me make it a bit easier, she was the ex-girlfriend of the student’s brother.  Not there yet, how about the stand-in for the neighbour (originally from Croatia) who could not meet me.  All these things are true and I will leave it to the master-puzzler amongst you to solve this unintended, riddle-like introduction.

Marta (pictured below) taught me many things.  I learned that Croatia is most definitely not in the Balkans (unless you want it to be).  I was aware from another email that by lumping these 9 countries together I could cause offence—but by then the damage was done, and to reverse things could have caused more.  I try now to use the term South-eastern Europe, but it lacks zing.  Marta did confess she uses the term when it suits her (“Oh, I’m just from the Balkans, you know”).  I do that too.  Whenever I make remarks that in ignorance cause offence, I blame it on my being a myopic American.

Thanks to Marta I have also learned how to use this blasted camera.  It took me two hours to change the date on the photo, but I feel a visual image will help this blog along, so I needed this lesson anyway.  As we go on I hope to add live interviews and video-clips.  Please bear with me—I am technically challenged.

Most importantly, Marta taught me a lesson about national pride.  This is not ugly nationalism, but pride in the best sense.  Marta is an exceptionally talented individual with an enormous amount going for her and a broad range of skills and interests.  She came to live in Oxford for six years, had great prospects, but came back to Croatia last November to be part of the rebuilding.  She loves Zagreb, feels at the centre of things in this bustling capital city and is proud of Croatia’s beaches and its 1800 islands (a figure supplied by Marta).  Marta now has a job with US based Grey Advertising—in fact she was working on a project over the weekend and only her “Balkan” (or Croatian) hospitality compelled her to meet me for coffee (sorry, Grey!).  If the social entrepreneurs I meet are like her (and we spoke of some of those we both knew of like SMS and EKO Mavrovic) this will be a very exciting trip! 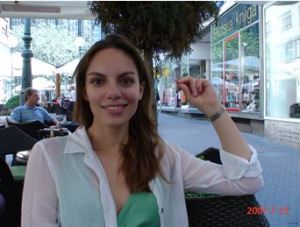 This is the question nearly everyone asks me.  The problem is that I am only just beginning to understand some of why I have decided to go there.  This decision was made between Christmas and New Year of 2006/7.  Like most things in my life, the decision was instinctive rather than the result of any careful deliberation.  So that I might spare future questioners my lengthy, drawn-out and inadequate attempts at a verbal response, I will list them carefully below.  Most of these have emerged only as the trip draws near—I depart on 10 July, 2007.

I do not know if that answers the question, but it is as much of the answer as I am aware of at this time.  This is also more efficient than struggling for an answer when asked—I will just refer questioners to this blog page!  Over the course of my travels, I will hopefully develop a much better answer.  Please stay tuned.

The last few weeks I’ve been toying with the idea of keeping some sort of diary about preparations for my trip to the Balkans and my feelings and impressions as I prepare for the trip.  In fact, somebody urged me to do this a few weeks ago, and, although I thought it was a good idea, I didn’t actually take any action.  I kept feeling as if I’d missed so much time for which I hadn’t been capturing these thoughts that it made no sense to start.  This reminds me of long time ago, when I wanted to save matchbooks from different hotels, given how many hotels I had already been to, only to talk myself out of it because I had already been to so many hotels for which I hadn’t had matchbooks.  Nevertheless, I also knew that the longer I put this off, because of the matchbooks I hadn’t saved, the less inclined I would be to ever start the collection.

Here I sit, or stand (I am dictating this) in the loft of my house on the 28th of April 2007 at 6:46 p.m.–and I have resolved to begin this blog today because there’s still so much I could capture.  I had an interesting thing that happened to me on Friday when I had a conversation on the telephone with someone from USAID.  I had been introduced to by a friend, after sending them my update on the Balkan trip.

I should’ve known right from the start that the USAID worker was a particular type of American.  He seemed to begin every e-mail with a similar phrase like, “greetings from warm Warsaw”, or “hello from sunny Ljubljana”.  After the third or fourth e-mail like this I should have been somewhat suspicious.  I was finally able to arrange a telephone conversation for yesterday in the morning.  I mentioned briefly, what I was up to, and there followed a long pause on the phone.  “Look Rod, let me be direct with you,” he said, “what precisely is the purpose of the trip?” or words to that effect.  I then reassured him that I was trying to be helpful, that I was open to learning something.  I would try to do whatever I could for the region and for companies and people in the region.  “My main purpose”, I tried to assure him, “was to learn, to help them and in the words of Paddy Ashdown to have a bit of an adventure.”  He paused and then said something like, “Look Rod, and forgive me for being so frank, but I’m not gonna waste my time or the time of people down there on what is basically a bit of a fact-finding mission.”  He then went on at great length to tell me how difficult it was to work with “the people down there” how challenging it was to get anything done, how useless they were in following up or taking action and how he therefore could not possibly take the time on something that quote was not going to lead to “something concrete”.  He then carried on for a few more minutes to tell me how busy he was, how small his team was, how much he is trying to get done and how much they have done.  I found this curious for somebody who told me how busy he was.  He then gave me a few names from a couple of research institutes, and I thanked him for his time.

The simple truth is that somebody like this particular USAID worker is just a bit of an asshole, and that in life one has no choice but to come across, self-important “know-it-alls” like this.  I shudder to think what it’s like for people who have to work with him.  On the one hand, they need the skills, resources, expertise and contacts that guys like this can muster.  On the other hand, dealing with him and his condescending ways must be an unbearable burden for the people of the region– especially after all they’ve been through.

Nevertheless, it is a useful case when illustrating one of the great problems I’ve had since I can see this trip at the end of 2006 or beginning of 2007.  That is, it is very difficult to pitch things correctly.  It’s hard to describe something that is a bit of a self-indulgence, also a fact-finding mission of sorts, as well as a genuinely well-intentioned (at least believe so) effort to help the people in a battered region and to highlight some of the positive endeavours which they themselves are undertaking. Perhaps it will come across as somewhat condescending?  Nevertheless it seems well-nigh impossible to get it right.  Sometimes you get the impression that people genuinely want you to lie about the nature of the trip—to create an expectation which I will then inevitably disappoint–as if I represent a huge investment fund was something like that.  Sometimes people want to assure themselves (and they never really fully assured) that this obnoxious Northern capitalist is just trying to make a big pile of money—as they all are.  But sometimes, just sometimes, it’s clear that somebody really gets what you’re trying to do–wonderful people like Jeremy Condor and the people he is introduced me to; Alma Masic or Valentin Mitev and others.  When you are introduced to come across people like this it makes the preparations I have undertaken really exciting.  And yes, it reassures me that the best of the human spirit still exists.  Even in, and in particular in a region that has had more than its fair share of difficulty.

I have to leave soon as I reviewed this first draft it looks like this is going to take some effort.  On the other hand, I also think it looks like it might be worth the effort.  What is clear is that this is turning out to be a marvellous experience.  What is also clear is that it’s an enormous amount of work.  But perhaps that’s as it should be?